HoneyBear’s check up was coming up this week but we had to unexpectedly take her Friday instead.  Thursday night when we got home she seemed happy, walked fine but kept laying down.  We noticed that her back left leg seemed really weak.  Any tripawd parent can understand the worry we had.  Three legs work great but two would be impossible.  The next day she seemed worse, didn’t want to step on it and acted like it was painful.  So we headed up Friday afternoon fearing the worst and as always hoping and praying for the best.

As always they got her right in and did exactly what I was hoping for, blood work, chest X-rays and left rear leg X-rays.  We didn’t get to see Dr Wiley right away because she was with other patients but the critical care Dr did a great job.  After waiting a very long and worrisome hour for results they called us back.  We were so relieved when the Dr confirmed it was just a sprain in her knee ligament! We were dreading to hear a metastic bone tumor so a sprain was great news in our eyes!  Rest and pain meds for a week.  Dr Wiley came in and said she looked at the X-ray as well as the in house radiologist and there was definitely no cancer.  She was still very pleased with HoneyBear’s progress but having lung nodules progress slow/stable for about a year means there are quite a few in her lungs at this point. They aren’t causing her pain or discomfort but she does cough a little more now.  Dr Wiley also added she doesn’t think she has had any other patient with lung metastases that has progressed this slow/stable.  I wish I could say it was this or that that has helped with the slow progression but honestly I feel like it is the combination of everything we do for her.  Of course the chemotherapy, then you have the supplements, diet, love and happiness.  Some other good news is her kidney values went down quite a bit!  We are thinking her new raw diet is helping with this!!

We also got to talk to Dr Wiley more about what else we can do.  We have been playing with a lot of ideas but the most hopeful medications we have come across is Rapamycin, Aratana’s Vaccine AT-014, and Zoledronate.  There are numerous phase 2 trials going on right now on Rapamycin directly following amputation and chemotherapy but HoneyBear doesn’t qualify because she already has metastases.  That doesn’t mean it won’t work against the metastases but just harder to get our hands on since she doesn’t qualify for the trial.  Dr Wiley is checking into getting this medication if it is available.  Aratana is a pharmaceutical company that has recently released an amazing vaccine for lymphoma.  They already closed a clinical trial on an immunotherapy vaccine for osteosarcoma called AT-014.  It showed great results against stopping/preventing metastases in dogs following amputation and chemotherapy.  The vaccine is awaiting FDA approval and should be available the later part of this year.  We are checking into getting it early through a law called compassionate use but it is unlikely the company will be able to release it early.  So then we have Zoledronate.  It is a biphosphonate drug that is given intravenously to help with bone metastases.  It is supposed to strengthen bones and stop the cancer from spreading to the skeleton.  Auburn University is currently enrolling dogs in a trial to test this same theory on lung metastases.  They have tried it in people with pulmonary metastases with great results.  Dr Wiley uses this drug on dogs that cannot undergo amputation for whatever reason.  She is very comfortable with its safety and is willing to give it a try in HoneyBear.  We figure we have nothing to lose at this point (except $ :-)).  If it doesn’t work we are still waiting on the other 2 medications and if it does…….then Hallelujah!!!!  Everything we are willing to try has very minimal side effects.  We would never give her anything that would compromise her quality of life

Yes I know what you are thinking and yes it IS getting expensive!  We love HoneyBear so much we are willing to make sacrifices for her well being.  At the moment we are having a garage sale, selling anything that we do not need right now.  We are playing with the idea of a Go Fund Me, but we both feel weird about it because we have never asked anyone for money EVER!  At the same time we are trying so much to buy time, find answers, research, learn, and educate others on what we learn every step of the way.  Our main goal is to of course give HoneyBear the best quality and quantity of life that we can but we also want to help others along the way.  We have had good results selling her “HoneyBear’s Hope” bracelets but that only puts a small dent on what is ahead of us.  Thank you so much to everyone who have supported us in  purchasing a bracelet and to those that have followed and are following her story every step of the way!

HoneyBear is resting her knee right now and hopefully within a week we can get started on the Zoledronate.  As always we remain hopeful for the best and continue to pray for healing, strength and guidance for our best friend.  I will update everyone as we continue this fight to whoop cancer’s booty!! 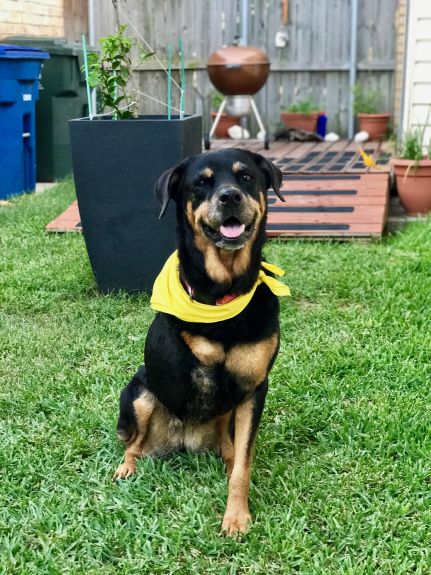 So much to talk about!  First of all I apologize for being M.I.A. for the last couple months!  HoneyBear’s last check up was the same as the others…….pretty much stable, maybe one more, maybe a millimeter bigger, very slow progression.  Given HoneyBear’s situation this is good news but lately I find myself thinking can we do more?  I know the facts HoneyBear is 10, has pulmonary metastases from a very aggressive cancer and has already done very well statistically.  We know how much we are doing for her and I know it sounds crazy but we want to try harder.  I have been researching everything from Stereotactic Radio Therapy to clinical trials to new and promising immunotherapy medications.  I won’t stop until I have exhausted all options with HoneyBear’s well being of course being top priority.  With the hope something will come our way to help her soon we started a fundraising effort.  We made bracelets and are selling them to raise funds for treatment and also to raise awareness.  They are yellow for Osteosarcoma and they say “HoneyBear’s Hope For A Cure-honeybear.tripawds.com.”  HoneyBear’s hope that one day there will be a cure for people and animals alike. 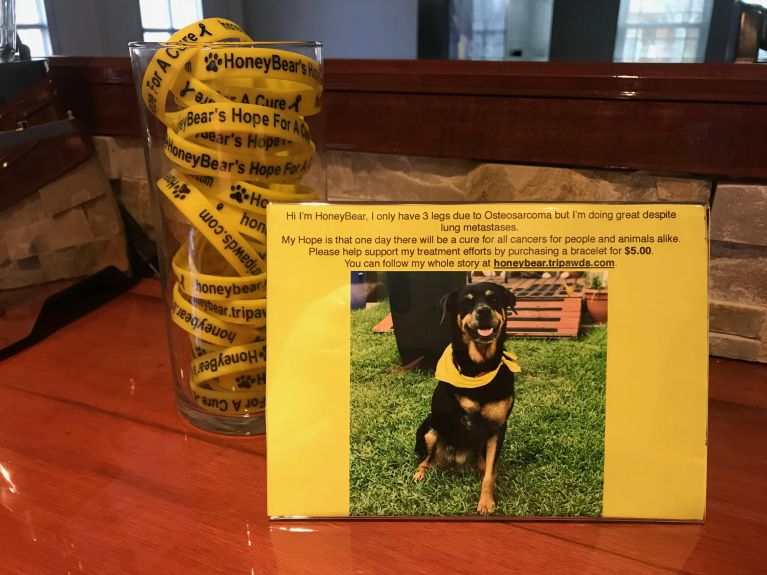 We also switched her diet.  I have struggled trying to find the right diet for her.  I want no grains and carbs for the cancer keeping in mind higher amounts of protein will make her kidney values rise.  This is nearly impossible but we seem to have found our answer!  Answers raw dog food. I know what you are thinking #1 Ewwwww and #2 that has to be unsafe!  Well that is exactly what I thought but the food is grown and processed at a small farm that is %100 organic and free range.  HoneyBear is on their detailed formula that is fermented for safety and as long as you’re open minded its not that gross.  I will keep you updated on this but so far so good. 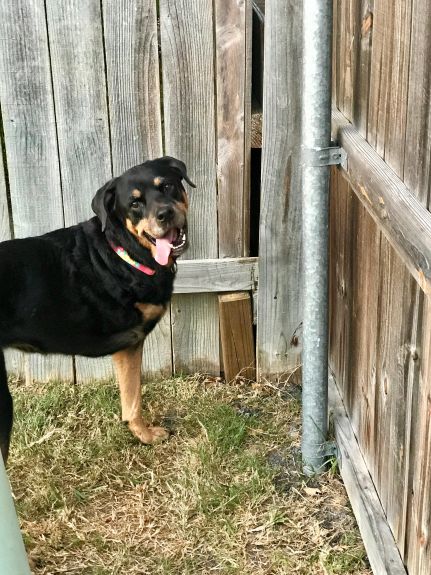 HoneyBear’s new excitement is the kittens the neighbors have in the yard behind us.  She runs out there every morning/night straight to the back fence and waits for them to come to the small opening to basically have a stare down. 🙂  She will stare at them for hours if we let her! I am actually glad this is her fun right now because honestly it is too hot in south Texas to do anything else!  When we do take her out and about she lays on her cool pad, wears her cool vest and……don’t laugh…….we also have a fan for her! 🙂 I am serious people its scorching down here! 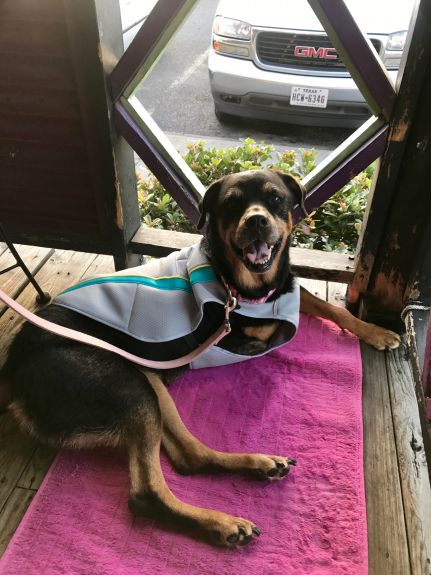 Despite the lung mets HoneyBear remains happy and that is the ultimate goal.  We wouldn’t do anything to jeopardize this.  I am praying for guidance on the next step for HoneyBear and also praying there is a next step.  Our hearts are in this %100 and we have to follow what we feel is right.  I know we are on this journey for a reason and if HoneyBear can be a part of finding a better treatment it would not only benefit her but other dogs and people living with this awful disease.  Standard care right now is simply not good enough.  We will never lose hope and we will do all we can to find another way.  One day there will be a cure and God willing HoneyBear will see that day.